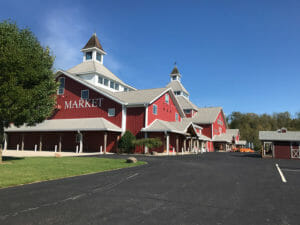 Located just off the bypass south of Elkhart, Indiana, the big red barn was built by Amish craftsmen using the old world tradition of joining mortise and tenon with wooden pegs. Construction on this expansive building began in 2006.

Longer than a football field, it features hundreds of solid heavy timber beams, columns and braces that are prepared with mortise and tenons that were cut and notched together for the framing of the three-story structure. High clerestory windows provide natural lighting and ventilation for the open interior spaces. It has three towering cupolas with the center cupola topping out at 84-feet.

Early in 2006 four investors, farmer, Kenny BeMiller, architect, LeRoy Troyer, developer-builder, Art Moser, and attorney, Mick Tuesley gathered with their families to fell a 100 year old white oak. This act symbolized the beginning of the wood timber framing at the market. The beam can be found in the southeast corner of the second floor. 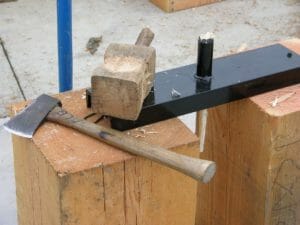 Harvested locally and milled on an Amish farm, white and red oak, hickory, beech and poplar trees were used for the columns, slope beams and braces. Over nine truckloads of Douglas fir beams were sourced from Idaho. The largest timbers used in constructing the center court are 16″ x 16″. The American black walnut found on the wooden staircase railing and trim came from a 96͛’ tree which fell during a 2003 storm in a forest preserve behind architect LeRoy Troyer͛s home. The wood was harvested, cut and air-dried for 3 years before being used. The hardwood pegs were made by pounding wood through a short, one-inch round steel pipe. After shaping, they are pounded into pre-drilled holes in the timbers. This secures the mortis and tenons. Once assembled, timbers and wood pegs continue to dry ensuring a tight wood-to-wood bond that is virtually impossible to take apart. 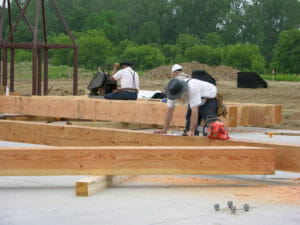